In my experience, students encountering this expression for the first time find it bewilderingly arbitrary; it becomes just one more item to add the a list of formulas memorized for the exam and promptly forgotten. My aim in this post is to demystify the \(F\) statistic. By the end, I hope that you will find the form of this expression intuitive, perhaps even obvious.

This is not a post about asymptotic theory, and it is not a post about heteroskedasticity. I will not prove that \(F\) follows an \(F\)-distribution, and I will blithely assume that we inhabit the idealized textbook realm in which all errors are homoskedastic. I will also dodge the question of whether you should even be carrying out an F-test in the first place.2 This is a post about understanding what the \(F\)-statistic measures and why it takes the form that it does.

The best way to understand the \(F\)-statistic is by looking at an example that’s so simple that there’s no reason to use an \(F\)-test in the first place. Here’s a dataset of students’ scores on two introductory statistics midterms that I gave many years ago:

To keep this example as simple as possible, I’ll drop the missing observations.3

Let’s call student #4 Natalie: she scored 88% on the first midterm but missed the second. Suppose we wanted to predict how well Natalie would have done on the second midterm had she taken it. There are many ways that we could try to make this prediction. One possibility would be to ignore Natalie’s score on the first midterm, and predict that she would have scored 81.4 on the second: the average score among all students who took this exam. Another possibility would be to fit a linear regression to the scores of all students who took both exams and use this to project Natalie’s score on midterm two based on her score on midterm one. If scores on the two exams are correlated, option two seems like a better idea: Natalie outperformed the class average on midterm one by 8.4 or roughly 0.77 standard deviations. It seems reasonable to account for this when predicting her second on the second exam.

It’s easy to fit these regressions in R. We’ll start with the restricted:

The syntax Midterm2 ~ 1 specifies a regression formula containing no predictor variables, only an intercept. Notice that our estimate for the intercept agrees with the sample mean score on the second midterm from above, as it should!

Turning our attention to the unrestricted regression, we see that scores on the first midterm are strongly predictive of scores on the second:

For a pair of students who differed by one point in their scores on the first midterm, we would predict a difference of 0.61 points on the second.

How much better is the fit of the unrestricted regression?

But there’s another way to carry out the same test. Although it would be overkill in this example, the principles that underlie it can be used to carry out tests in more complicated situations where a simple t-test wouldn’t suffice. Rather than examining the slope estimate from the unrestricted regression, this alternative approach compares the sum of squared residuals (SSR) of the two regressions to see which does a better job of fitting the observed data.6 It’s easy to compute the SSR of the two regressions from above using the residuals() function: 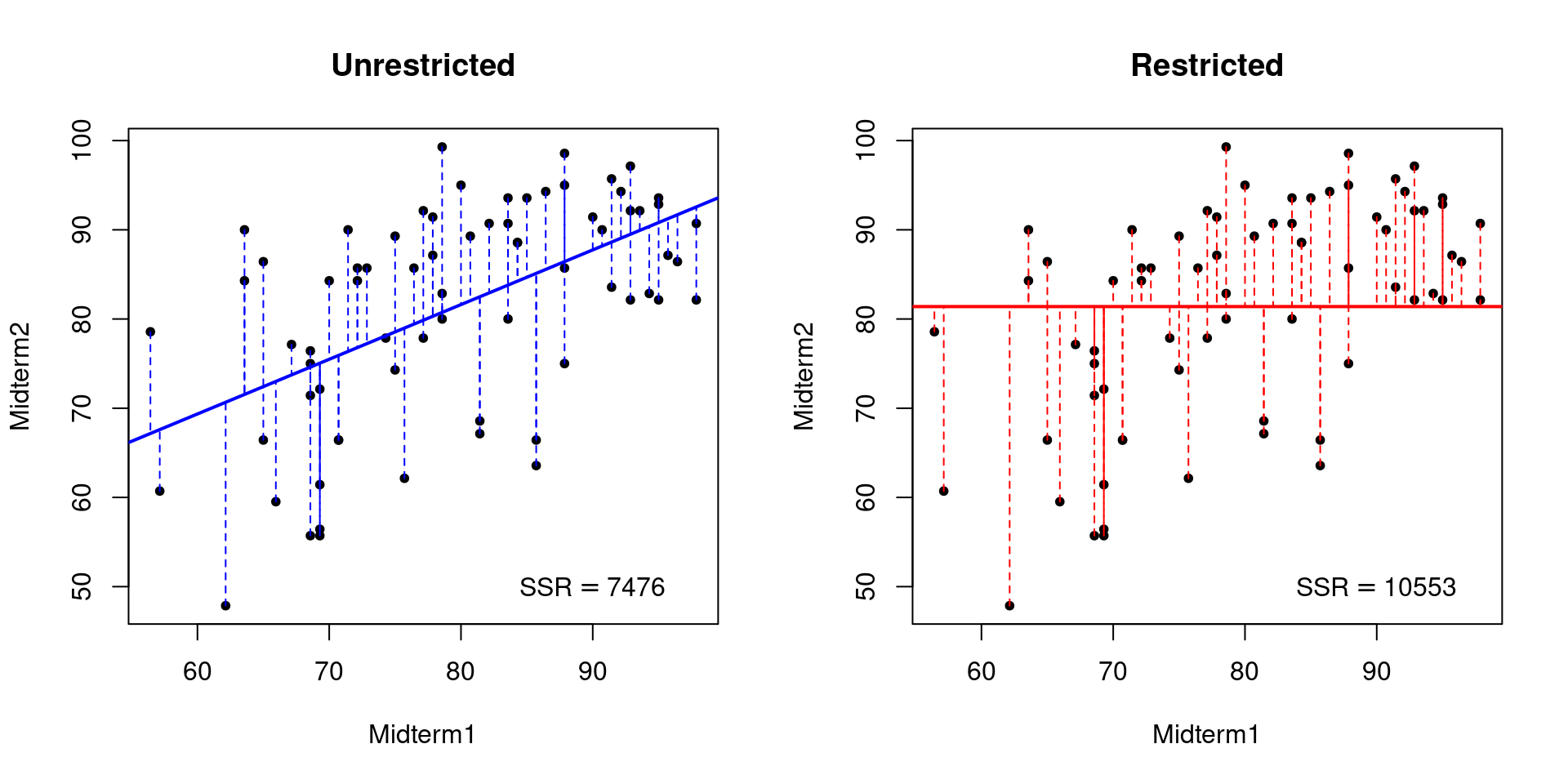 The simplest way account for units is by eliminating them from the problem. This is precisely what we do when we carry out a t-test: \(\bar{x}/\text{SE}(\bar{x})\) is unitless because the standard error of \(\bar{x}\) has the same units as \(\bar{x}\) itself. Any change of units in the numerator would be cancelled out in the denominator. This is a crucial point: test statistics are unitless. We do not compare \(\bar{x}\) to a table of normal critical values measured in inches for a distribution with standard deviation \(2.4\); we compare \(\bar{x}/2.4\) to a unitless standard normal distribution.

The t-statistic eliminates units by taking a ratio, so let’s try the same idea in our comparison of SSR_r to SSR_u. There are various possibilities, and any of them would work just as well from the perspective of eliminating units. The F-test statistic is based on a ratio that asks how much worse the restricted model fits relative to the unrestricted regression. In other words, we ask: how much larger is SSR_r compared to SSR_u as a percentage expressed in decimal terms?

We’ve nearly arrived at the F-statistic. To see what’s missing, we’ll use a bit of algebra to re-write it as \[F \equiv \frac{(SSR_r - SSR_{u})/q}{SSR_{u} / (n - k - 1)} = \left(\frac{SSR_r - SSR_u}{SSR_u}\right) \left(\frac{n - k - 1}{q}\right).\] We obtained the first factor on the RHS, \((SSR_r - SSR_u) / SSR_u\), simply by reasoning about units and the nature of constrained versus unconstrained optimization problems. Stop for a minute and appreciate how impressive this is: simple intuition has taken us halfway to this rather formidable-looking expression. To understand the second factor, we need to think about sampling uncertainty.

In the midterms example we found that the restricted regression SSR was 41% larger than the unrestricted one. Is this a big difference or a small one? Units don’t enter into it, because we have already eliminated them. But the midterms dataset only contains information on 71 students. If we merely want to summarize the relationship between test scores for these students, there is no role for statistical inference: summary statistics suffice. Tests and confidence intervals enter the picture when we hope to generalize from an observed sample to the population from which it was drawn. Imagine a large population of introductory statistics students who took my two midterms. Now suppose that we observe a random sample of 71 students from this population. How much information do the observed exam scores for these students provide about the relationship between midterm scores that we in the population?8

The larger the sample size, the more evidence an observed difference in the sample provides about a potential difference in the population. We can see this in the expression for the standard error of the sample mean: \(\text{SE}(\bar{X}) = \sigma_x^2/\sqrt{n}\). The larger the sample size, the smaller the standard error, all else equal. Accordingly, given two datasets with identical summary statistics, the larger sample will have the larger t-statistic. The same reasoning applies to the F-statistic above. The numerator \((n - k - 1)\) in the second factor increases with the sample size \(n\). This magnifies the effect of the first factor. An \(SSR_r\) that is 41% higher than the \(SSR_u\) is “more impressive” evidence when the sample size is \(1000\) than when it is \(10\). Small samples are intrinsically more variable than large ones, so we should expect them to turn up anomalous results more frequently. The F-statistic takes this into account.

So why \((n - k - 1)\) rather than \(n\)? This is a so-called “degrees of freedom correction.” By estimating \(k\) regression slope parameters and \(1\) intercept parameter, we “use up” \((k + 1)\) of the observations, leaving only \((n - k - 1)\) pieces of truly independent information. This is not particularly intuitive. In a stunning departure from my usual advice to introductory statistics and econometrics students, I suggest that you simply memorize this part of the F-statistic. It may help to notice that the same degrees of freedom correction appears in the expression for the standard error of the regression, \(SER \equiv \sqrt{SSR/(n - k - 1)}\), a measure of the average distance that the observed data fall from the regression line.

Now we know how to determine \(q\), but the question remains: why does it enter the F-test statistic? Above we discussed why \(SSR_u\) cannot exceed \(SSR_r\) in a particular dataset. Now we have to think about what happens when sampling uncertainty enters the picture. The sum of squared residuals measures how well a linear regression model fits the observed dataset. Crucially, this is the very same dataset that was used to calculate the regression slope and intercept. In effect, we have used the data twice: first to determine the parameter values that minimize the sum of squared vertical deviations and then to assess how well our regression fits the data, measured by the same vertical deviations. The danger lurking here is a phenomenon called overfitting. We’re not really interested in how well the regression fits this dataset; what we want to know is how well it would help us to predict future observations. In-sample fit, as measured by SSR or related quantities, can be shown to be an over-optimistic measure of out-of-sample fit. This is well-known to machine learning practitioners, who generally use one dataset to fit their models, the training data, and a separate dataset, the test data, to evaluate their predictive performance. In general, the more “flexible” the model, the worse the overfitting problem becomes. Because adding restrictions reduces a model’s flexibility, this creates a challenge for any procedure that compares the in-sample fit of two regressions. Because it is less flexible, we should expect the restricted regression to fit the sample data less well than the unrestricted regression even if the restrictions are true in the population.

To drive this point home, I generated a dataset called sim_data in which \(Y_i = \alpha + \epsilon_i\) where \(\epsilon_i \sim \text{Normal}(0, 1)\). I then simulated a large number of regressors \((X_{i1}, X_{i2}, \dots, X_{iq})\) completely independently of \(Y_i\). (For the simulation code, see the appendix below.) In the population from which I simulated my data, none of these regressors contains any information to predict \(Y\). Nevertheless, if \(q\) is relatively large compared to the sample size \(n\), some of these regressors will appear to be correlated with \(Y\) based on the observed data, purely because of sampling variability. In this example I set \(n = 100\) and \(q = 50\). Fitting a restricted regression with only an intercept, and an unrestricted regression that includes all 50 regressors from sim_dat we obtain

While we’re here we might as well carry out the test!

The associated p-value is

so we resoundingly reject the restriction: first midterm scores clearly do help to predict second midterm scores. The sim_data example gives a very different result. The test statistic in this example is well below any standard critical value, and the p-value is very large:

The F-statistic is a product of two factors. The first factor measures how much larger the sum of squared residuals becomes in percentage terms when we impose the restriction. We use a relative comparison to eliminate units from the problem. The second factor accounts for sampling variability. The larger the sample size \(n\) relative to the number of restrictions \(q\), the more we “inflate” the value of the first factor. The only thing you need to memorize is the degrees of freedom correction: \((n - k - 1)\).

I used the following code to generate my plot comparing the SSR of the restricted and unrestricted regression models in the midterm exams dataset from above:

and the following code to generate the data contained in sim_data