From the Poisson Distribution to Stirling's Approximation

The Poisson distribution is the most famous probability model for counts, non-negative integer values. Many real-world phenomena are well approximated by this distribution, including the number of German bombs that landed in 1/4km grid squares in south London during WWII. Formally, we say that a discrete random variable \(X\) follows a Poisson distribution with rate parameter \(\mu > 0\), abbreviated \(X \sim \text{Poisson}(\mu)\), if \(X\) has support set \(\{0, 1, 2, ...\}\) and probability mass function \[ p(x) \equiv \mathbb{P}(X=x) = \frac{e^{-\mu }\mu^x}{x!}. \] Using some clever algebra with sums it’s not too hard to show that the rate parameter, \(\mu\), is both the mean and the variance of \(X\). 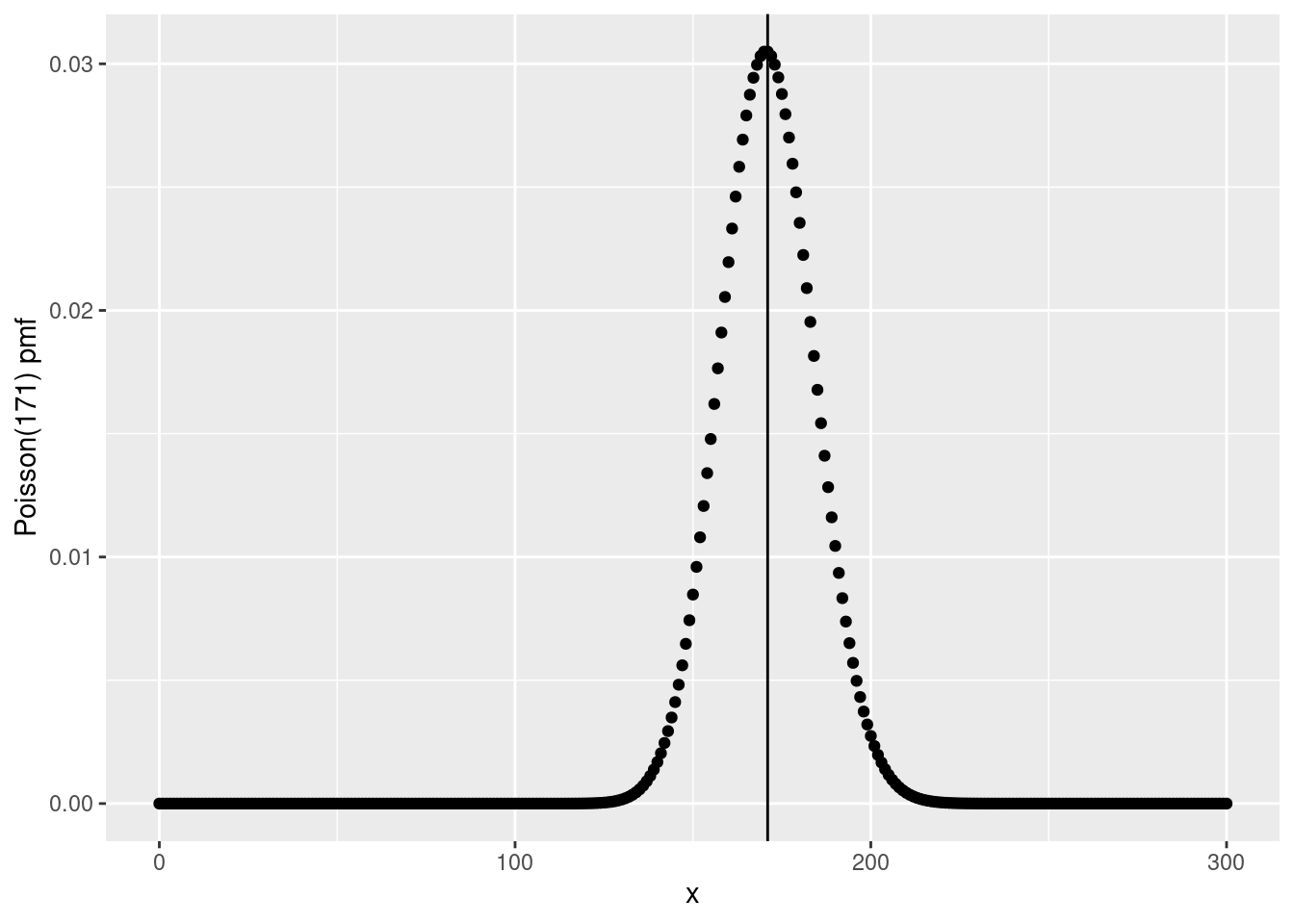 For such a large value of \(\mu\), this distribution looks decidedly bell-shaped. And indeed, it turns out to be extremely well-approximated by a normal distribution, as we’ll see below. It’s also clear that \(X\) is most likely to take on a value relatively close to 171. We can use dpois() to calculate the exact probability that \(X = 171\) as follows: the answer is just over 3%.

Now let’s try to calculate exactly the same probability by hand, that is by using the formula for the Poisson pmf from above.

What gives?! The abbreviation NaN stands for “not a number.” The problem in this case is that both the numerator and denominator of the fraction inside of my_dpois() evaluate to infinity when mu and x are 171, and the ratio \(\infty/\infty\) is undefined.1

As I discussed in an earlier post, computers can only store a finite number of distinct numeric values. It’s not literally true that factorial(171) equals \(\infty\). What’s really going on here is that factorial(171) is such a large number that it can’t be stored as a floating-point number. In this case there’s a very simple fix. If you haven’t seen this trick before, it’s a helpful one to keep up your sleeves: if you run into numerical problems with very large or very small values, try taking logs.2 The log of the Poisson pmf is simply \[ \log p(x) = -\mu + x \log(\mu) - \log(x!). \] R even has a convenient, built-in function for evaluating the natrual log of a factorial: lfactorial(). Now we can compute the log of our desired probability as follows:

To obtain the probability, simply exponentiate:

Of course this just passes the buck to lfactorial(). So how does this mysterious function work? The bad news is that I’m not going to tell you; the good news is that I’m going to show you something even better, namely Stirling’s approximation: a way to understand now \(n!\) behaves qualitatively that turns out to give a pretty darned good approximation to lfactorial(). This may seem like an odd topic for a blog devoted to econometrics and statistics, so allow me to offer a few words of justification. First, computations involving \(n!\) come up all the time in applied work. Second, it can be extremely helpful for certain theoretical arguments to have good approximations to \(n!\) for large values of \(n\). Finally, and most importantly from my perspective, the heuristic argument I’ll use below relies on none other than the central limit theorem. So even if you’ve seen a more traditional proof of Stirling’s approximation, I hope you’ll enjoy this alternative approach.3

I have a bad habit of trying to add a “moral” or “lesson” to the end of my posts, but I suppose there’s no point trying to break the habit today! While there are easier ways to derive Stirling’s approximation, there are two things I enjoy about this one. First, we get a more accurate approximation than \(n \log(n) - n\) with practically no effort. Second, making unexpected connections between facts that we already know both deepens our understanding and helps us “compress” information. If you ever forget Stirling’s approximation, now you know how to very quickly re-derive it on the spot!